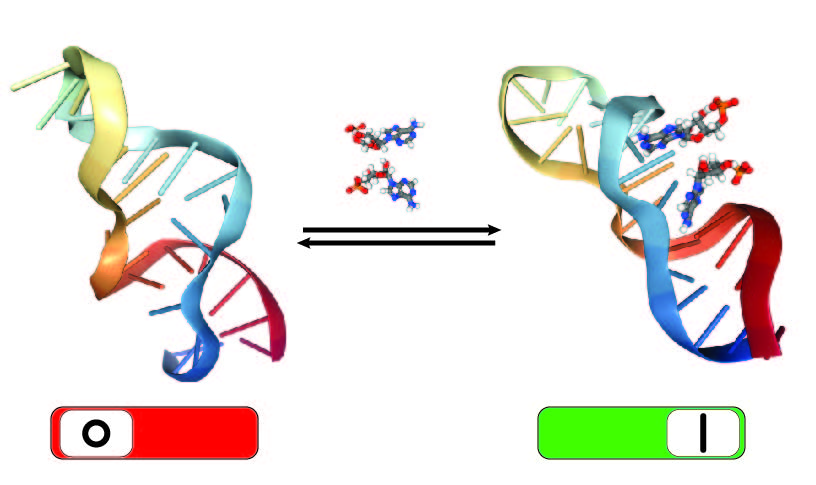 This time, I’ll write about science for a change from my previous post, more specifically, about what we do in the lab I work at (www.francescoriccilab.com).

If you’ve been following this blog, you should already have a general knowledge about DNA nanotechnology. A term used to describe the set of tools and techniques we regularly use to design, build and produce nanostructures made of DNA.

This is a relatively new research field that uses the genetic material to make molecular machines that can perform interesting tasks in the nanoscale. Most of the research groups in our consortium are experts building relatively large structures that can move in a controlled manner (see Rafael’s post for more info). You will find many examples of these type of structures if you search for images with the tag “DNA nanotechnology”.

We can say they are the most famous in the scientific literature, and their use has become widespread in the broad field of nanotechnology given the advances of DNA origami and its advantages compared to other building methods (for further info, check out Yash’s online lecture).

At the beginning, it was hard to find concrete applications for these structures, and they were found to be “just a scientific curiosity, without any possible application” by some researchers around the world (I’m paraphrasing, but it’s somehow true). The scientific challenge was to make these nanostructures “do something cool” if the field wanted to avoid its death.

And with efforts, research groups around the world have managed to do it!

One might think that a big structure is needed in order to make nanomachines that can perform tasks, but this is not always the case. Indeed, it is also possible to build these molecular machines and have them “sense” diverse molecular cues and respond in a preprogrammed manner. This is what the lab I work at specializes in.

By using chemically modified DNA strands, the widespread knowledge about the different DNA motifs and the thermodynamics and physics of DNA folding, we can create biologically inspired nanomachines that can be controlled in a precise manner.

I will try to walk you through some of the basics, starting from the DNA motifs we take advantage of for our nanomachines, I’ll also mention some “standalone” DNA sequences that have intrinsic properties and can imitate some biomolecules as proteins or enzymes to finally show you some interesting nanomachines we have been able to develop in the lab.

I consider these to be part of the “Functional DNA toolbox”

DNA duplex, hairpins and triplexes as a structural basis for DNA switches

As you may remember from your high school biology classes, DNA follows strict base pairing rules, you can see its natural shape and conformation in Joakim’s post. This biopolymer has a preferred conformation (called B-DNA) but we have found it to be quite malleable and versatile as a building material, and several other stable conformations have been found both naturally, and in laboratory setting which you can see in the following figure.

The simple base pairing rules allows us to design oligonucleotide sequences and predict how they will fold and what will be their general shape and stability in solution. Normally, when we think of DNA, we think of a double helix, made of two different strands, but given its flexibility, a single oligonucleotide can fold upon itself and form loops, hairpins, triplexes and even quadruplexes if its sequence permits it. Most of our work consists in designing and tweaking these sequences, to have them acquire the shape and stability we desire for our applications. Luckily, there are several free online resources available to us in order to quickly predict the formation of these structures, such as NUPACK.

Finally, some structures (like kissing loops in RNA or DNA triplexes) are too complex to predict without molecular dynamics or other advanced simulation tools, and they require experimental validation.

The triplexes, for examples, can be interesting for us because their formation depends on the pH of the medium, which means that when they are integrated into a molecular nanomachine, its activity can be modulated with the acidity of the solution they are dissolved in.

These are two important members of the “Functional DNA Toolbox” and they are reported oligonucleotide sequences that can perform or catalyze chemical reactions in the case of DNAzymes or recognize/bind molecules in the case aptamers. These sequences can be included in a larger DNA oligonucleotide and combine their functions in order to acquire more complex behaviors.

The previously mentioned structures and sequences can be combined into one dimensional structures that can incorporate their different capabilities in order to create nanodevices that respond to their physical-chemical environment.

Granted, a great amount of ingenuity and creativity is needed in order to make a working nanomachine, but the results can be quite astonishing and achieved with relatively simple tools and materials.

Take for instance this DNA switch developed in my current lab, it uses a triplex motif formed by two oligonucleotides, one that is chemically modified in both extremities and the other that can bind in the middle, forming a triplex.

When an antibody is present, the triplex is opened and the middle DNA strand is free to diffuse in solution, being able to participate in other DNA based reactions. This is a simple but effective way to couple DNA reactions with antibodies and can find applications in more complex nanodevices.

A DNA nanomachine is a complex that incorporates several switches like the one I previously showed you and coordinates them in order to perform more complex tasks like delivering a molecular cargo. They generally consume molecular fuel, analog to what proteins complexes in our cells do and can be controlled by external inputs.

Take for instance another research paper from our lab, a nanodevice that can transiently “grab” and release a molecular cargo using a short DNA strand as fuel. The system is composed of two DNA strands (aptamer and inhibitor), the molecular cargo and a restriction enzyme that can selectively degrade the inhibitor. When the aptamer recognizes the molecular cargo they form a stable complex, represented as the first structure of the figure below. The complex can be open when the Inhibitor strand is added, which can bind to the loop (blue part) of the aptamer, releasing the cargo as is depicted in the second step. The system completes the cycle when the enzyme degrades the inhibitor strand to return to the original state, where it can bind again to the cargo and restart the cycle.

Some possible applications of this technology

DNA nanotechnology has allowed the benchtop production of several interesting nanomachines, capable of performing a wide array of tasks from sensing to drug delivery. The physical chemical characteristics of DNA allows the tweaking of its properties and activity which would make it a suitable technology to be integrated in the pharmaceutical industry.

It is my hope that we will see in the future commercial applications of this technology in the field of personalized diagnostics and/or smart drug delivery.

But in the meanwhile, I’ll work on graduating and developing my own!