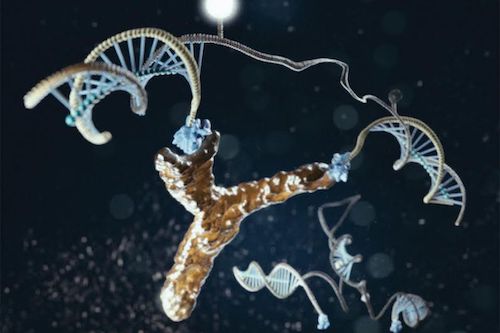 Still following us? Then you should be about to become an expert in DNA nanotechnology! Well, maybe that was a bit too optimistic, but still, you can’t deny you already have an insight on the field thanks to Yash; you’re able to see in your laptop screen DNA structures whose sizes are 10,000 times smaller than the diameter of a human hair thanks to Joakim; and also, you witnessed the controlled movement of these little things thanks to Rafa.

The way I’ll contribute to this magnificent exhibition is by introducing you some examples of functional DNA nanostructures, because these entities are tiny but able to carry out a wide range of different tasks!

DNA devices can be designed so that they perform a particular function in response to specific inputs. Specifically, here in Ricci’s lab, several strategies alike were designed, where DNA nanomachines operate only after their interaction with antibodies, the famous biomarkers produced by our body when a foreign agent dares to surpass the barriers of our organism and triggers an immune response.

The key concept applied to develop these systems is based on the inherent Y-shape geometry of most antibodies, with two variable regions, separated by about 15 nm, that are able to recognize specific antigens.

Having this in mind, if we introduce antigen-modifications into the DNA strands and then design their sequences carefully enough, the result is DNA systems that perform fine tasks, as I’ll show you in the following examples:

1. A molecular slingshot made from DNA able to “shoot” its cargo in specific locations

Crazy as it may sound, they replicated a slingshot but with a size several millions of times smaller, now at the nanometer level.

The strategy is designed so as the presence of an antibody stretches up the DNA strands as if they were the rubber strips of the slingshot to finally release a single stranded DNA, mimicking the shooting of a small stone. Now imagine that this released strand is selected so as is able to target and shut down proteins that are over-expressed in diseases like cancer. Wouldn’t that be a revolution?

Apart from its huge potential, this approach stands out because of its versatility: Simply by changing the design slightly, the system can respond to different antibodies and release different kinds of therapeutic cargos, which makes this strategy suitable for lots of applications!

Here the researchers developed a DNA system that exhibits fluorescence only when the single strands are brought into close proximity. The system was designed as a molecule of interest for sensing. In this way, the antibody is responsible for the confinement of the DNA strands into a limited space, which brings the two fluorophores (green hexagons) into close proximity, thus generating a detectable signal.

This nanoswitch is a big step forward for the field of diagnostics, as it would allow to measure our current health state from home, similar to a diabetic sensor, but it can be extended to bacteria, viruses, tumors and other common diseases. No more need for specialized centers, sophisticated instrumentation, or invasive methods.

3.     The use of antibodies as builders for nanostructures

One of the newest roles given to antibodies was as molecular builders of structures at the nanoscale, in this case, nanotubes made of DNA.

Here, the strategy is based on triggering a DNA-based reaction (strand displacement) only upon the presence of the specific antibody. This reaction activates the DNA-tiles that self-assemble to form the final nanotube.

It is surprising how we can take advantage of the natural function of antibodies as biomolecules for recognition for the accomplishment of tasks of a completely different character, as in this case, for the assembly/fabrication of nanostructures.

Overall, with these three examples I only showed you just the tip of the iceberg regarding the possibilities for the design of functional DNA structures. Therefore, you must stay tuned to my colleagues to keep discovering this science!

Written by Lorena Baranda, PhD student at the University of Rome Tor Vergata